A. They are very similar laptops, but there are a few differences. Here is the relevant info, originally posted in my complete SSD performance upgrade guide for these models! 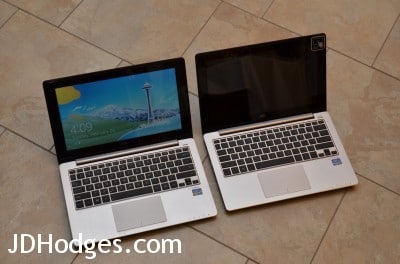 S200E (left) and X202E (right) these machines are virtually identical!

They are all identical in basic construction, the differences are in the CPUs, bluetooth capabilities, and bundled accessories. Specifically:

Right out of the box the X200E is a very nice machine and internally it is actually the most full-featured of the group. I have used both the X202E and the S200E and found them to be excellent machines. If you need super fast network speeds for file transfers, take a good look at the Q200E as it is available with Gigabit Ethernet! However, with all of the models, the slow hard drive really drags down their overall performance

. So I chose to upgrade mine with a Samsung 840 SSD and the performance improvement has been drastic!

Overall all of these laptops represent a great value and you can pick and choose which model best fits your needs and budgets. The S200e is especially attractive  it goes on sale as the price can be $399 or lower. This entire line receives a rating of 4/5 stars, the one star is docked for the lack of a Core i5 or Core i7  CPU and the relatively short battery life. However, for the price they are definitely great machines!