UPDATE: 2013.03.10 adding a new desktop client to the list as well as info for iOS and Android RDP clients.

UPDATE: 2012.04.05 added more info regarding certificate errors (and ignoring them!)

This week I have been using OSX alongside Windows. I quickly realized that I needed a good remote desktop connection (terminal server) client for Mac OSX Lion. Here are the primary candidates I considered:

CoRD: Remote Desktop for Mac OS Xhttp://cord.sourceforge.net/CoRD is a Mac OS X remote desktop client for Microsoft Windows computers using the RDP protocol. It’s easy to use, fast, and free for anyone to use or modify. ⬇ Download…

UPDATE: For mobile usage, both on iOS (iPhone, iPad, iPod touch) and Android you may want to checkout:

I installed both and tested them from my MacBook Air to my Dell M6500 laptop and a variety of other systems over the course of a workweek. Here is the short version of my results:

CoRd has some cool features like automatic screen resizing when you resize the window and it has a nice interface for adding and saving connections. However, overall the perfomance was pretty bad in my setup. Lots of lag and just generally a little flaky in my use.

Conversely, Microsoft’s offering is fairly straightforward if you are used to the Windows RDP clients. It is a bit of hassle to adjust settings and save different connections, however, performance was EXCELLENT.

For me, the choice was clear: the official MS RDP client. It performs smoothly even on slow connections and did I not notice any deal-breaking* issues.

UPDATE: Some commenters have suggested that CoRD performance has progressed nicely over since this article was first written and iTap for desktop has also come online as a nice option for those willing to pay money for a RDP cleint.  Those two clients are definitely worth taking a look at as unfortunately MS seems to be letting their MS RDP client languish 🙁

*Note, there is one minor annoyance: when connecting to some Windows based PC, Microsoft’s Remote Desktop Connection Client for Mac may display a warning message: “The server name on the certificate is incorrect. Do you want to connect to this computer anyway?” You can bypass this message and still connect to the computer by clicking Continue. I am looking for a permanent solution (so you don’t have to press “Continue” every time)…

UPDATE 1: Commenter Zachary suggested I just fix any certificate errors, but alas this is not always an option for me.

UPDATE 2: you can see how the Windows based Remote Desktop Client handles this situation: 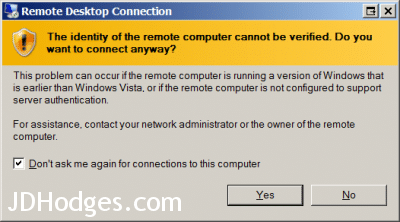 It seems an ideal solution to me… it notifies you once, but you can turn off subsequent notifications.

If you’re working with saved connections…

“Always connect, even if authentication fails.”

If its not a saved one, go from RDP -> Preferences. Then either let it save as default (not really recommended), or save off a connection.