Well, I bought a Mac. Specifically a MacBook Air 11.6″ notebook. It is the best ultralight travel computer I could find.

I had known the MacBook Airs were good little computers for quite some time, but after they did away with the backlit keyboard a while back I scratched them off of my “short list” of top notebook. Well, they re-added the backlit keyboard and they also put in some spicy new CPUs and nice big SSD options. So I did what I never thought I would, I bought a Mac.

After all that, I will get to the point… since I am playing with Mac OSX a bit (before probably switching to Win 7 on bootcamp or VMWare Fusion) I need replacements for some of my “go to” apps.

First up, a good Torrent client. The top candidates: uTorrent and Transmission 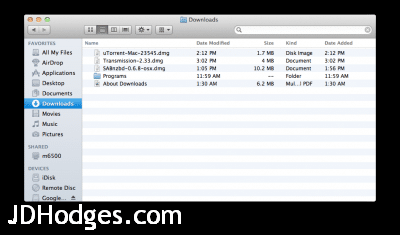 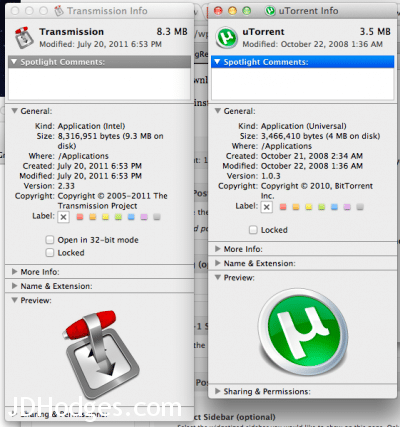 To be updated as I use the apps…

*Note: I returned my MacBook Air so I have not been able to add the screenshots and UI comparisons that I wanted to. However, the next time I am doing development work in my VMWare Mac OSX installation I will try to take screenshots and update the article.

Both clients performed admirably in my tests. Neither had any problems solidly downloading a variety of legal torrents. Speeds were comparable, neither provided an extreme DL boost compared to the other. uTorrent gets a small win here since I prefer its speed reporting and graphing capabilities vs. Transmission.

uTorrent is readily available on Windows and Mac. Transmission open source and is available on Mac, GTK+ and Qt as well as being ported to a variety of platforms.

Each client takes a totally different approach to user interface and content presentation. Transmission is very minimalistic and “Mac like” while uTorrent provides you with loads of information.

This really comes down to individual user preference but I generally like more info rather than less so for me uTorrent gets the nod.

Thankfully these are both great torrent apps for use on Mac OSX Lion. If I had to choose one I would choose Transmission. When I use a Mac I try to keep things simple, Transmission is a very simple and streamlined interface that makes downloading torrents easy. The complexity is hidden and with the “keep it simple” mantra I find myself not even digging into the options that I often play with on uTorrent for Windows.

This conclusion (choosing Transmission) really came as a surprise to me. When I use Windows I personally tend do more complex things and at those times I prefer the control/info that uTorrent offers in plain vie. However, especially in older versions, it is not a streamlined simple interface. It is a power user interface IMHO. But on Mac OSX uTorrent just does not fit in, it does not quite belong in Apple-Land. Whereas Transmission fits into the landscape perfectly.

As Keith pointed out in the comments below, Transmission also has a longer history on Mac OSX and they seem to really focus on pushing the limits for the Mac version. Whereas the Mac version of uTorrent may always lag behind the more popular Windows version when it comes to features and development.

In the end – both of their place

In addition to choosing Transmission, I am also leaving uTorrent for Mac installed. Neither takes up significant resources and they both have a place in my torrent toolbox.

I hope this info was helpful to you and I encourage you to share your experiences as well. 🙂