Exede has added a new offering in their satellite internet stable: Exede Evolution. This is the first satellite internet plan that I am aware of which offers high speeds and NO DATA CAP on PHOTOS and TEXT (web pages). That means you can view as many web pages and photos as you want. Downloads of programs or videos still count against the 5GB monthly cap, which can result in slowed speeds for non-text non-photos, but even if you surpass that 5GB limit… you still get FULL SPEED for webpages (text) and photos.

Overall, for $64.99, Evolution looks great. It really seems to address a lot of the issues that people have (or think they have) with a high speed service that has a monthly data transfer cap. Very cool stuff and an elegant solution, I particularly like that even after the monthly limit is hit people can still do textual/photo stuff at full speed. I will be recommending this plan to my parents when it is available in our area. 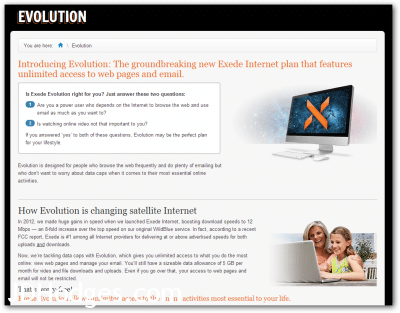 Evolution | Fast and Affordable Satellite Internethttp://www.exede.com/evolutionEvolution is designed for people who browse the web frequently and do plenty of emailing but who don’t want to worry about data caps when it comes to their most essential online activities.

Carlsbad, Calif. – August 19, 2013 –Exede® Evolution, a unique new satellite Internet plan from ViaSat Inc. (NASDAQ: VSAT), offers unlimited, full-speed access for web pages and email as well as a high-speed Early Bird Free Zone for other Internet services. The new plan is now available in selected markets in 30 states.
ViaSat created Exede Evolution to address customer desires for a service plan that does not count usage for email and web pages against a data allowance. Recent research from the Pew Internet and American Life Project indicates that as adults use the Internet for more communications, transactions and entertainment, email and web search continue to be the “backbone of the Internet.”
Exede Evolution, which addresses these essential online activities, is another illustration of ViaSat’s transformation of satellite Internet – first with access and speed and now with innovative service plans. The result is a satellite Internet service that has become a first choice for many rather than a last resort for a few.
“We created Exede Evolution as part of our overall plan to continue to improve our core service in ways that are different from other options in the market,” said Lisa Scalpone, vice president, Satellite Services. “Our team continues its focus on delivering a high-quality service and a great experience for our customers. We launched Exede Internet with the goal of making sure every one of our customers on the ViaSat-1 satellite receives our best speed — and now we want to make sure that customers who want unlimited access to web pages and email at full speed get that as well.”
Scalpone said the Exede service line will continue to include its traditional data plans based on data usage, now called “Classic” plans. Any current subscriber may switch over to the Evolution plan at no charge, if Evolution is offered in the subscriber’s area.
For one monthly fee of $64.99, customers receive unlimited access to email and web pages, always at full speed. This introductory offer also waives the entire initial set-up fee of $149.99.

The Exede Evolution plan includes:
• Download speeds of up to 12 Mbps and upload speeds of up to 3 Mbps.
• Early Bird Free Zone, which provides full-speed, unmetered access to everything on the Internet, including video, from 3 a.m. to 8 a.m. daily.
• 5 GB of data to use for other services, including online videos, music, voice video and chat.
• Introductory offer of anti-virus/anti-spyware software.

About Exede (www.exede.com)
Exede, a service of ViaSat Inc., delivers high-speed Internet to more than 550,000 subscribers across the U.S. With download speeds of 12 Mbps, Exede service has transformed satellite Internet for households that previously had slow, inadequate Internet service. It is also proving to be a popular, competitive alternative to residential DSL and wireless Internet. In June 2013, the company began offering Exede Voice residential telephone service over its network, optimized for quality and reliability.
In the FCC annual benchmarking report, Measuring Broadband America 2013, Exede service led all Internet service providers included in the study in surpassing advertised speeds. ViaSat-1 earned a Guinness World Records® achievement as the highest-capacity communications satellite in the world. Exede Internet is also a winner of a 2013 Edison Award for innovation and performance and a winner of the 2012 Popular Science “Best of What’s New.”
About ViaSat (www.viasat.com)
ViaSat delivers fast, secure communications, Internet, and network access to virtually any location for consumers, governments, enterprise, and the military. The company offers fixed and mobile satellite network services including Exede by ViaSat, which features ViaSat-1, the world’s highest capacity satellite; service to more than 2,300 mobile platforms, including Yonder® Ku-band mobile service; satellite broadband networking systems; and network-centric military communication systems and cybersecurity products for the U.S. and allied governments. ViaSat also offers communication system design and a number of complementary products and technologies. Based in Carlsbad, California, ViaSat employs over 2,800 people in a number of locations worldwide for technology development, customer service, and network operations.