Can I buy an Android App and use it on multiple devices? [SOLVED]

Question. Hello, I am used to the Apple App Store where one apple account can buy an app and then it can be used on any iOS iDevice that is tied to that apple account. How does this work on Android?

Answer. Good question! It should work very similarly. Instead of an apple account, your apps will be tied to your Google Account. You should be able to install and re-install on any device that you own. This is particularly hand when you upgrade to a new phone or tablet!

*it may be possible for a specific developer to tie an app to a particular device, but most apps should NOT have the “feature” and in all likelihood it will be disclosed, or an app that did this might have some pretty negative reviews in the Android Market pointing it out.

Other relevant links on the Android App topic:

Android.com – Android Market Developer Distribution Agreementhttp://www.android.com/us/developer-distribution-agreement.html3.6 Reinstalls. Users are allowed unlimited reinstalls of each application distributed via the Market
app store – Can bought android apps be shared between devices you own? – Super Userhttp://superuser.com/questions/95863/can-bought-android-apps-be-shared-between-devices-you-ownOn the iPod Touch/iPhone since it is tied to your iTunes account, I am quite sure you can have your bought apps on multiple devices you own. However now I have the Motorola Droid, and am waiting for a tablet, and considering getting a Nook and rooting it to run my own apps. 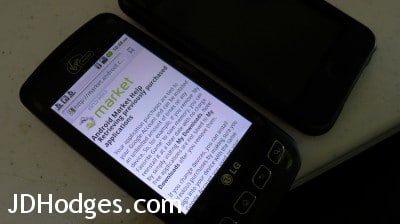 BONUS Answer: you should also be able to use your Amazon apps for Android on multiple devices!

Android apps purchased from Amazon will work on multiple devices, use Amazon DRM | Android Centralhttp://www.androidcentral.com/android-apps-purchased-amazon-will-work-multiple-devices-use-amazon-drmAndroid applications purchased in Amazon’s app store (which may finally go live to consumers any time now) will use Amazon’s special sauce of digital locker/digital rights…