NOTE: this article describes using the N2A microsd card to boot Android on the Nook HD+, allowing one to run the full spectrum of Android apps!

So far the install process has been painless, though quite sloooow. Here is the screenshot showing the image being written to the 64GB SanDisk memory card: 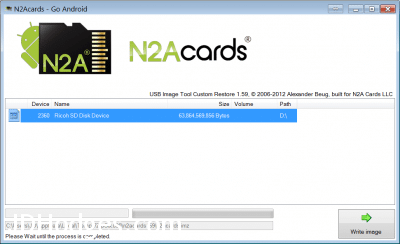 After the image completed writing, I inserted the MicroSD card into the Nook HD+ and booted it up. The standard Android initial setup screen started up and after completing setup here is the home screen that greeted me: 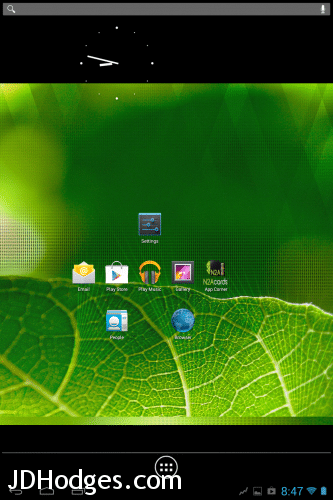 Everything looks okay (search bar, Google play, notifications area, etc.) if not particularly polished (the wallpaper doesn’t fill the entire screen and some things seem a tad small or disproportional).

Going into settings, here is the readout: 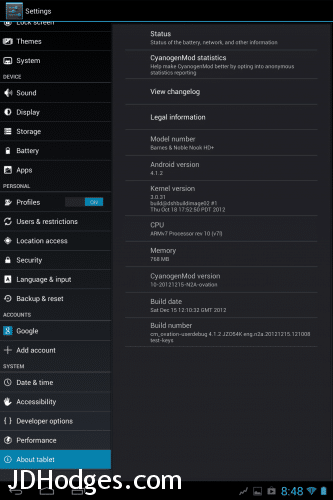 So, how fast is the Nook HD+ when running Jellybean? Here are benchmarks! 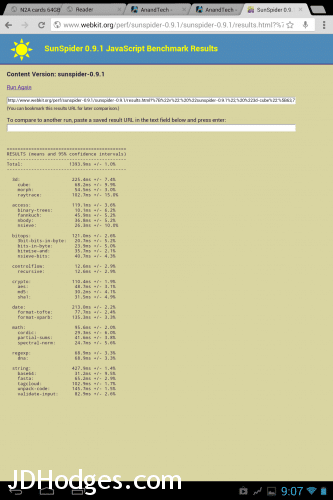 UPDATED: complete Sunspider results here, these were taken after killing and background apps. The results are slightly faster than the screenshot.  BONUS: here are results with the CPU speed locked at 1500MHz (1.5GHz).
and some more benchmarks… 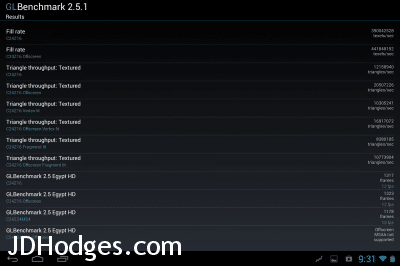 The TI OMAP 4470 CPU in the Nook HD+ seems to rank slightly ahead of NVIDIA’s Tegra 3 processor. You can read a fairly thorough exploration of the OMAP4470 at Anandtech.  Considering the fairly adroit CPU and the ‘buttery smoothness‘ that Jellybean is supposed to bring to the table, I don’t know why the Nook HD+ running Android is not fast. 🙁 More details about that below…

How is general usability?

Most things work fairly well and the tablet runs about like you would expect a midrange Android tablet to run.

I would not describe it as buttery smooth but it is not molasses slow either. When compared to an HTC 4G EVO LTE running Jelly Bean, the Nook HD+ seems slower than the EVO in virtually every respect. Still, compared to a low-end generic Android tablet the Nook HD+ is faster.

Performance Summary: you won’t confuse the Nook HD+ with a high-end tablet like the Google Nexus 10, but it still generally gets the job done. 3.5/5 stars

In setup and general usage there were occasional hiccups: 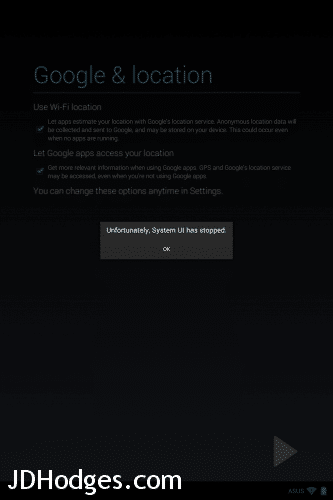 An error during setup, however, it didn’t actually affect anything and setup went just fine. 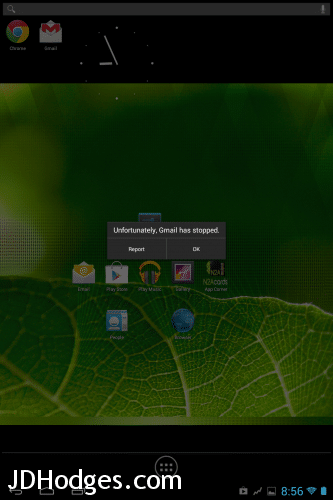 On first sync, Gmail also crashed. After restarting Gmail all was well.

No total system crashes were encountered. Rather there were just minor app issues that seemed to be resolved after restarting the app.

Annoyances: the volume rocker appears to work, but it does not actually adjust the volume. 🙁 Instead you have to use the software volume slider.

Major issue for me: I could not get the Nook HD+ to mount as a USB drive, this was a deal-breaker for me as it left only wifi for file transfer. Wireless transfer on the Nook HD+ is excruciatingly slow when compared to USB transfer. 🙁 I have contacted n2acards.com support for help with the USB mounting issue but have not received a response as of yet. [see the update below, the Nook HD+ with N2A is not mountable as a USB device with Windows]

However, I am unable to mount my Nook HD+ in Windows. I have disabled USB debugging and followed all the steps here:
http://n2acards.com/uploads/default/files/Computer_Does_Not_See_Nook_Drive.pdf
Whenever I select the option to ‘Turn on USB storage’ it never works. 🙁

Can you help me with this issue please?

Here is their response:

Hello,
I am sorry you are having this issue.

You will not be able to mount that into Windows.

You will need to use Dropbox to move files from your computer to your Nook running Android.

Please let us know if you have any other questions.

Major issue reported by others: no HDMI output support. Apparently when the Nook HD+ HDMI cable is inserted, the Nook HD+ reboots into B&N’s proprietary environment. So far it appears no HDMI goodness for Android on the Nook HD+ 🙁

Stability and software completeness: 2.5/5 it crashes less than cheapo tablets, but it is not as rock solid as a high-end Nexus device. Likewise, most stuff works but there are some MAJOR annoyances (no USB mounting, volume rocker didn’t work, no HDMI out).

+If you already own a Nook HD+, I have no qualms recommending you try the N2A for running Android on your tablet. It will give you access to a huge variety of apps and performance is fairly equivalent to the stock Nook environment.
-If you are pondering buying a Nook HD+ instead of a Nexus 7, Nexus 10 or other high-quality tablet… I would recommend skipping the Nook HD+ & N2A. You will not get quite the fit, finish and performance of those other dedicated Android tablets.