When I took a look at the Nook HD+ around Christmas time it really required N2A or RootMyNook to get maximum utility out of the tablet (full Google Play app access). However, with the latest update B&N enabled native Google Play support right out of the box for the Nook HD & the NookHD+! (well it did require an automated update before Google Play showed up, but nothing beyond that…)

Overall these tablets are a pretty amazing deal for the price. While I might take a Nexus 7 over the Nook HD, mainly due to the better software/CPU aspects of the Nook 7… I find the Nook HD+ irresistible at the $149 price it has a much higher resolution display than the Nexus 7 and it also has more screen real estate for browsing etc.

So, it is sad that B&N gave up in their fight against Amazon (Kindle Fires), Google (Nexuses) and Apple (iPads) but it does not detract from their legacy of nice hardware at reasonable prices. My recommendation, buy one! 🙂 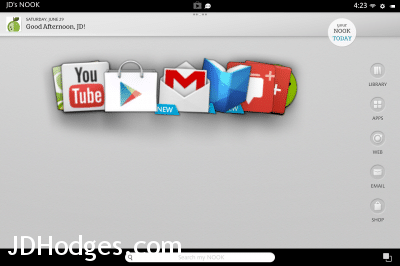 The Nook’s Carousel of Apps

Barnes & Noble Gives Up On First-Party Nook HD Tablet Businesshttp://www.huffingtonpost.co.uk/2013/06/25/nook-hd-uk-2013_n_3495756.htmlAmerican bookseller Barnes & Noble has decided to spin off its tablet businesses in order to arrest worsening revenue declines. While the company’s Nook HD and HD+ tablets have won relatively strong praise from reviewers – including from the UK where its devices launched for the first time last year – it had not sold enough to really compete with Apple and Samsung in the pure gadget space, or Amazon in the media consumption ‘E-reader-plus’ market.

Nook HD and HD+ Android Tablets Discontinued | Tablet Crunchhttp://tabletcrunch.com/2013/06/26/nook-hd-and-hd-android-tablets-discontinued/Barnes and Noble has confirmed that it’s ditching its line of Nook tablet PCs. The Nook HD and Nook HD+ were Barnes and Nobles attempt at a Kindle Fire killer. Like Amazon, the company locked down the Android operating system so that users couldn’t install anything from the Google Play store. A couple of months ago it reversed that decision, but it was too little too late. Over Christmas last year, Nook tablets claimed less than 2 per cent of market share, and its revenues have been steadily falling since. It’s now going to stop making the Nook HD and Nook HD+, but it says it will still work with other tablet manufacturers on Nook branded devices. One big surprise is the continuation of the Nook e-reader. After Barnes and Noble slashed prices for the Simple Touch and Simple Touch Glow, many analysts felt that its days were numbered. But, for now, the Simple Touch range is safe. We may even see an updated version of the Simple Touch in due course. Like […]