If you are like me and sometimes need to use a VPN for work or privacy you may be interested in how VPN over Exede works. So here are a few results from testing a VPN connection over Exede.

Summary: It is not the ideal VPN solution, but it is reliable and can get the job done in a pinch. 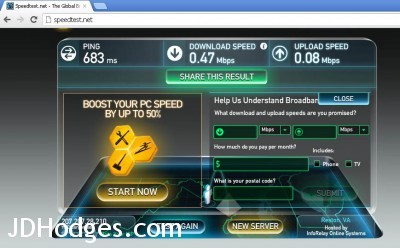 Despite the somewhat slow speeds and high latency, the connection was solid and did not drop/disconnect.