Saturday, 2012.03.17 J.D. H. 144 comments
UPDATE: 2012.12.02 Some users are reporting an issue where Facebook still displays the ‘Make Cover Album’ as shown in these instructions, but it is not selectable. This appears to be a bug in Facebook, or that perhaps they are disabling the feature but haven’t remove the option 🙁 It is rather absurd how many times Facebook has messed with this rather simple option and how much grief they have caused their users!
OLDER UPDATE: 2012.09.29 Facebook just changed things up again. Thankfully the steps are the same as when I originally wrote this, but to avoid confusion I have uploaded two updated screenshots showing the new look for the ‘Make Album Cover’ option.

Summary: steps-by-step instructions that WORK for changing a Facebook album cover! Tonight I uploaded some new photos to an old Facebook album. So I decided to make the album cover feature a new photo. This used to be easy. Now I could not even find the option on Facebook anywhere. I did a bit of Googling. All the top results showed OUTDATED solutions 🙁 So, FINALLY I found/remembered how to set the Facebook album cover! Here is the solution for anyone else facing this issue 🙂 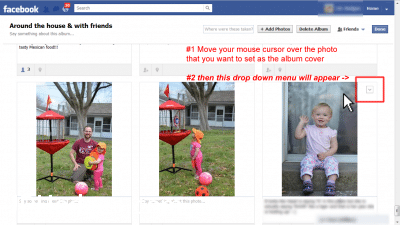 Step 1. Hover over the photo you want to set as the album cover Step 2. Choose the dropdown option 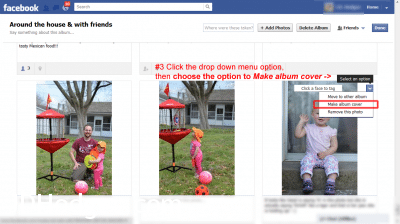 Step 3. Set the album cover to the image that you want!

TIP: if you enjoy uploading your awesome photos to Facebook, but wish your camera did a better job, then checkout Amazon’s camera deals section. They have some BIG discounts on some nice cameras like the Olympus XZ-1 as well as some sweet free accessory bundles.  🙂

2012.09.29 The screen looks different, but the Edit album is still the correct option to choose

Voila, you have now reset the album cover to exactly the image you want. Enjoy!!! 🙂 PS if you find this post helpful, please rate it in 1 to 5 stars in your comments below and I will keep a running rating tally for this tip! [starreview tpl=16] (so far)

PS  thanks to commenter Gary for alerting me that I had incorrect images on my latest update, the issue has now been fixed! 🙂