This review of the X100 comes at an odd time, years after its initial release and in the face of many new competitors. Today you can pick up an Olympus E-PL5 and 17mm F1.8 lens for a price that is in the same ballpark as an X100.  That makes for some pretty tough competition. This review would read a lot differently if this were 2011, but time marches on and this is my view as of Dec 2013! 🙂 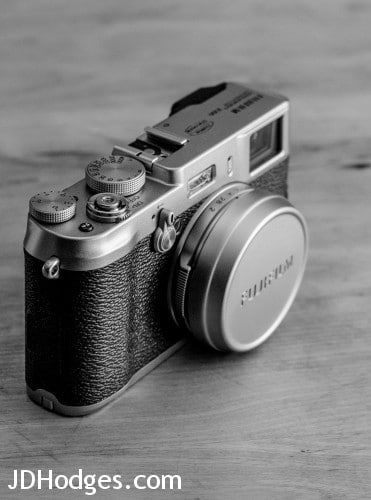 This is not a definitive review and I do not mean to offend Fuji users, these are just my personal impressions after using the X100:

Dislike:
Fiddly control button (the ‘OK’ button)
Slow and cumbersome for indoors and/or poor lighting
Not particularly adept at higher ISOs
Plastic battery door
I would like a dedicated ISO knob as well
Slow burst write speeds and just generally a bit too sluggish for my taste
Faster glass would help take this camera to the next level, as it is currently too slow when minimal light is available (and cannot bump the ISO up without degrading quality)

NOTE: Is the X100 an ugly duckling? My wife dislikes the look of the X100, summing it up as basically the camera looks like an early 2000’s attempt at melding a digital camera with some leftover film bodies. After looking at the X100 anewI think she is somewhat right about the look. It neither looks cutting edge digital nor entirely authentic analog. The same critique may be leveled at other manufacturers but for whatever reason I find Olympus’ offerings to be a bit more seamless in integrating the new with the old.

Overall: The X100 is a fun camera to shoot with if you have the time and patience.  When trying to shoot movement I missed many shots with the X100 and I found it woefully inferior to the focusing of the E-PL5. However, when shooting static scenes (or non critical motion where I could just keep shooting until I got it) the X100 can be loads of fun and really reminds me of the ‘old days’ of cameras and photography.

PS In some ways the X100 reminds me of the Olympus E-10 and E-20 cameras (which are some of my favorite cameras ever). They had some major drawbacks but were capable of delivering excellent quality if you and your subject had the patience to deal with the camera’s limitations. The camera and the shooting experience were front and center. This is in contrast to a camera like the Nikon D7000 or the Olympus E-PL5 which just seem to want to get out of the way and take good photos…