Of course this is old news, but Google Reader is now officially no more. 🙁 Goodbye old friend! 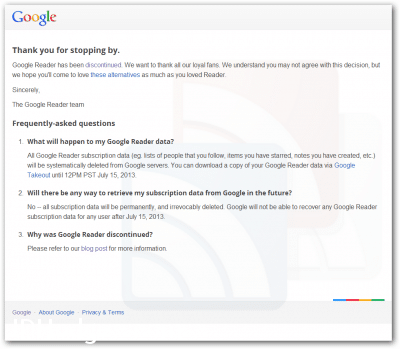 The sad initial notice that Reader was going to be retired:

We launched Google Reader in 2005 in an effort to make it easy for people to discover and keep tabs on their favorite websites. While the product has a loyal following, over the years usage has declined. So, on July 1, 2013, we will retire Google Reader. Users and developers interested in RSS alternatives can export their data, including their subscriptions, with Google Takeout over the course of the next four months.

via Official Blog: A second spring of cleaning.