The DRAM class action lawsuit and subsequent settlement has finally borne fruit for claimants.  Checks were mailed earlier this week and recipients can look for them in their snail-mail-box any time now. Here is a scan of the check I received:

History of the DRAM lawsuit

As you may recall, this lawsuit was the result of (alleged) price fixing by DRAM companies. This was a pretty big deal as the settlement ended up being $310 million.

A wide variety of products (computers, printers, video games, networking equipment, etc.*) utilize DRAM and any individual claimants settlement payment was directly related to how much was spent on DRAM products during the relevant time period (1998-2002). Claims generally ranged from a $10 minimum up to $1,000 or more for large purchasers.

*All devices containing DRAM are included in the Settlements.  From January 1, 1998 to December 31, 2002, DRAM was included in many different types of digital devices, including computers (laptops and desktops), servers, graphics cards, video game consoles, MP3 players, printers, PDA’s, DVD players, Digital Video Recorders, Point of Sale Systems and others.  If you have any question about whether or not you bought a product containing DRAM, call 1-800-589-1425. Source: DRAM $310 Million Settlement FAQ

I submitted my purchases made in that time period and I had begun to wonder if the settlement would ever pay claimants. Thankfully everything has finally come to a closure 🙂 If you also submitted a claim, make sure to check your mail! 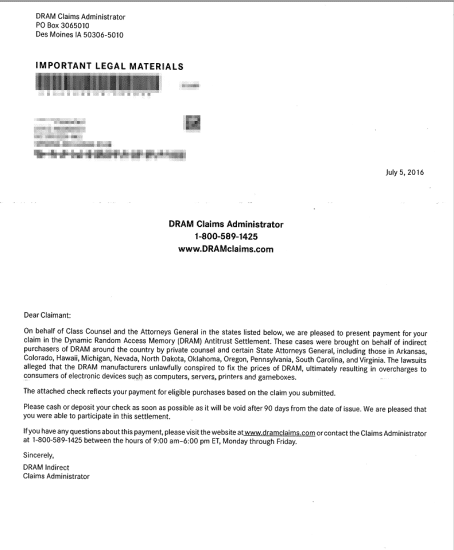