A rather exciting email from the creator of Robot Turtles (the fun board game that teaches kids how to program). I pre-ordered a version and you can even use promo/coupon code TEACHERS at thinkfun.com for 20% off! 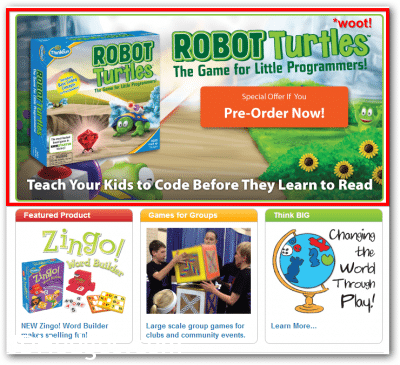 Here is the email in its entirety:

First a brief summary (or, as the kids say, TL;DR):

A new, enhanced version of Robot Turtles is available for preorder.
Next, a long rambling version of same.
Five short months ago we closed the doors on the most successful Kickstarter boardgame in history – 13,000 backers, 20,000 games, 36 tons of cardboard, 65 countries.  I ordered 25,000 copies to be sure to leave “a couple of extras”.
Those are now gone, and your current options for getting a copy are somewhat grim: $70 on amazon, up to $100 on ebay from scalpers.  Plus shipping.  And that’s lousy, because now that you have been taken care of, it would be kind of neat if the rest of the world could try out the Turtles as well.
Some weeks ago, I got a call from an unusual person. I’ve already mentioned that I learned to program from my dad, starting with BASIC and moving on to Logo, from which Robot Turtles draws its inspiration.  What I haven’t shared is that in my senior year in high school, I wanted to take the AP Computer Science test.  And there wasn’t anyone to teach it.
So my dad volunteered at Beaverton High School for the semester and taught a room full of unruly teenagers to program.  The language we used was C, and the book we used was The C Programming Language, written by the inventors of the C language, Brian Kernighan and Dennis Ritchie.  And while I’ve dabbled in everything from Pascal to Ruby since then, C was my first love and has always been my go-to tool, from college to the present.
So it was kind of cool when Dennis’s brother Bill called me up and told me that he wanted to teach kids to program too.
It was even cooler when I learned that Bill owns Thinkfun (formerly Binary Arts), who makes two of my kids’ favorite games: S’match and Zingo. Plus Spinout, which I believe was a mandatory accessory for every basement in the late ’80s.
Long story short*, Bill’s bringing the Robot Turtles back.  This summer, Bill will be putting Dot, Beep, Pangle, and Pi on store shelves, with all the gameplay of the original plus some cool enhancements. I’ve seen previews of the graphics and they’re seriously snazzy – the same turtles, but with brighter backgrounds and shinier colors (including gold foil!).  The box will hold the pieces better; no dump-and-sort.  The rulebook will not fall apart when you open it.  And content of the rulebook will be completely redone, making it waaaay easier to get started.
But the best part is that Bill and I sat down and thought through all the stuff I’d heard from you, the most excellent backers of the project.  Stuff like:
Bill wanted to come up with something special for you, the backers of the game, to get excited about.  So in addition to the base game, there’s going to be a really awesome bonus pack.  Honestly I’m as excited about the bonus pack as the re-issue.  Bill’s showed me the designs, and it solves all of this stuff: preset functions that make it easier to introduce the Function Frog, extra mazes, and a PILE of extra jewels!  They’re printing just 5,000 of these, and they’re only available to people who preorder the game.
Thinkfun is selling the whole kit and kaboodle – preorder game and bonus pack – for $25 plus shipping, or free shipping if you order two. There are 4,990 left (because I just ordered 10 of them).  You can get them here.
Of course, they’ll be available this summer at mainstream retailers and the usual suspects online. But no bonus pack.  (They might print and sell more bonus packs later, I dunno what they’ve got planned, but that’s what they’re telling me).

Wait, $25? Does that mean you ripped me off?!
I know, I know.  Some of you are going to feel like you got a bum deal because you paid $29 through the Kickstarter, and now there’s a shiny (literally) new version out for $25.  I don’t blame you if you’re frustrated.  But here’s my $0.02.
– The Kickstarter version has a few advantages. There are more crates (8 vs 4) and the Bug is a card, which is way better for Galapagos play.
– You’re getting it 9 months sooner.
– You can probably sell your used version for a lot more than $25 on ebay, right now, with my blessing.
So hopefully you’ll forgive me for finding an actual boardgame professional who can make it cheaper than I could. 🙂

Will it be available internationally?

Bill tells me the launch is planned for the US.  Thinkfun does distribute some of its games internationally; whether that happens or not will probably depend on its US reception.

Is it worth getting the new one?

If you love Robot Turtles and you’ve got the budget for an upgrade, I think it will be a better – shinier, easier to store, etc.  I think the preorder kit is particularly awesome.  But you won’t feel bad about “just” having the original Kickstarter version.

I own a game store – can I order some?

If you have an existing distributor who carries Thinkfun games, they can set you up.  If not, just drop me a line at http://support.robotturtles.com and I will ask someone at Thinkfun to get in touch. (International, can’t hurt to ask!)

Sorry for the repetition

I’m going to post something similar as a public Kickstarter update soon, but I wanted you all to have first crack at the 5,000 preorders.
Handy links