Red Dog is an Australian movie that is considerably more compelling than the majority of what Hollywood puts out :-). It also has a superb soundtrack. When I first tried to purchase the soundtrack I had a lot of trouble finding it.

Thankfully, I eventually found the soundtrack and it is absolutely amazing :-). Evie – Let Your Hair Hang Down (Part 1) is my favorite track but there are a number of other gems. If you enjoyed the music during the movie, you won’t be dissapointed in the sound track :-). I have no qualms rating it 4.5/5 stars: [starreview tpl=16]

PS here is some info that may help you avoid all the difficulties I encountered:

Amazon.com – unfortunately, I could not find it for sale on Amazon 🙁

Sanity.com.au – has the soundtrack available on CD and here is their track list:

iTunes Australia – they actually have Red Dog (Music from the Movie) available for download!

Complete song list from the movie credits (there may be typos)

I could not find the soundtrack info on IMDB so I OCRed the screenshot of the song list… here is the result:

NOTE: all of the info here is for reference purposes only, specifically: for readers to determine what songs are in the movie.:-)

Screenshot of the song title credits for this awesome movie: 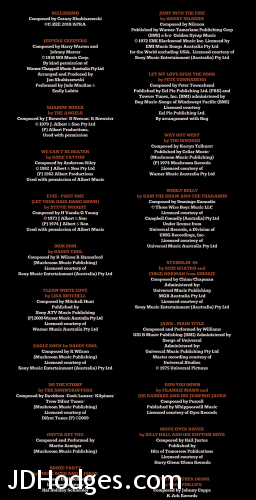