Summary: brief article describing a setup for running a good sized air-conditioner using solar in an entirely off the grid environment.

My family has lived off-the-grid for a number of years and generally it has been a wonderful experience. However, summers in Missouri can get rather warm so this year I set out to cool our entire house with AC. Previously only our bedroom was air conditioned and the other rooms had ceiling fans or stationary fans.

Prior to the “full home” AC project, our solar setup was as follows:

The only change required for full house AC has been adding:

Here’s a brief rundown on those two component choices:

My existing Xantrex ProSine 1800 watt inverter should have been able to handle the Frigidaire AC unit with no problems. Specifically the FRA106BU1 AC unit has a max draw of 925 watts. The ProSine inverter has a continuous output rating of 1800 watts.  Theoretically this would allow the ProSine to easily power the Frigidaire with plenty of capacity left to spare (1800w-925w=875 watts excess capability). 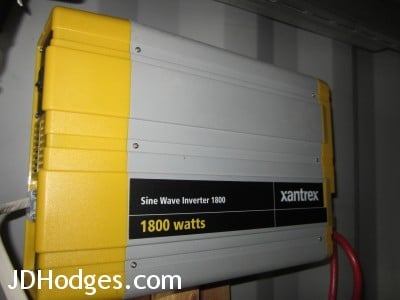 However, the ProSine would only run for about 30 minutes before reaching a thermal threshold and shutting down (it has an internal temperature probe attached to one of the heatsinks). The fan on the ProSine had gone bad recently  and I was using two external fans (one at the air intake and one at the exhaust point) to cool it so I assumed insufficient cooling was the problem. I replaced the internal fan and still had the same results. The operating environment for the ProSine was fairly warm to begin with so perhaps in a cooler setting the ProSine would have been okay.

The eventual solution that I chose was to use TWO inverters. One for heavy-duty loads and one for sensitive electronics.

Specifically, I purchased a heavier-duty modified sine wave inverter to use for the air-conditioner and my other heavy loads (motors, compressors)  and kept the ProSine operating for sensitive electronics equipments (computers, communications equipment etc.) 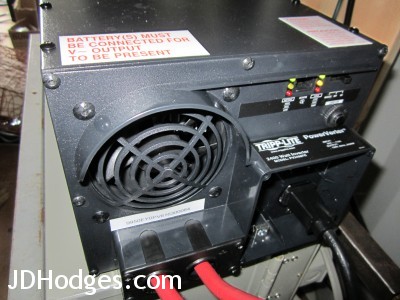 BD Batteries – Power Inverter Informationhttp://www.bdbatteries.com/inverterconsiderations.phpSome inverters produce “cleaner” power than others. Simply stated, “sine wave” is clean; anything else is dirty. A sine wave has a naturally smooth geometry, like the track of a swinging pendulum. It is the ideal form of AC power. The utility grid produces sine wave power in its generators and (normally) delivers it to the customer relatively free of distortion. A sine wave inverter can deliver cleaner, more stable power than most grid connections.

What is the difference between Modified Sine & Pure Sine Wave Inverters?http://traveloasis.com/powerinverters2.htmlIf your equipment can accept some voltage fluctuation, consider a modified sine wave inverter. These inverters provide mobile power at a…

Inverter FAQ – DonRowe.com – Frequently Asked Questions about Power Invertershttp://www.donrowe.com/inverters/inverter_faq.html#modifiedThe inverter draws its power from a battery (preferably deep-cycle), or several batteries wired in parallel. The battery will need to be recharged as the power is drawn…

I have been very impressed with Frigidaire air conditioners. From their small 6000BTU units all the way up to 15000BTU they seem to perform admirably. I chose a middle of the road 10000BTU  Frigidaire AC unit for our purposes and it has performed admirably. 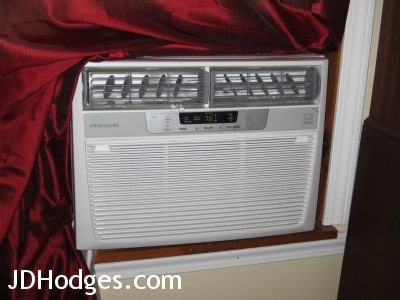 TIP: prices tend to go UP in the summer for AC units, so looks for some bargains in the winter!

How is everything working?

Splendidly. Our house is fairly small and the Tripp Lite has no problem running the Frigidaire unit as much as we want. Typically this has been from about 11AM (when the house starts warming up) to about 7:30PM (when the temps outside start cooling down). Of course the AC doesn’t need to be cooling all the time, it simply kicks on when the set temperature is reached. we generally set it at about 76 degrees Fahrenheit.

One of  the great things about electricity from solar is that you get plenty of sunshine in the hottest parts of the year.  Without the AC we’d have quite a surplus of electricity that we wouldn’t be using. With out current setup, the AC allows us to utilize more of what we were already producing.

Finally, I would be remiss if I failed mention that the best way to cool your house is by making sure it energy efficient in the first place: good insulation, having shade trees (or other sources of shade) if possible, and generally anything you can do to keep the sun’s hot rays off and out of your house! Generally if you are able to do all of that, simple ceiling fans  and/or an attic fan (for when you want to pull in cool air or exhaust hot air) may be sufficient. If not, and your house is still too warm, then AC can certainly be pretty nice. 🙂