CamScanner is a rather nice scannerapp for phones and tablets. One of the most desirable features for me is the OCR capability. The OCR works well for basic documents with minimal formatting but alas, it is nowhere near as good as what Fujitsu has in the ScanSnap software (which embeds the OCRed text in the PDF and preserves excellent formatting).

Here are the CamScanner results*: 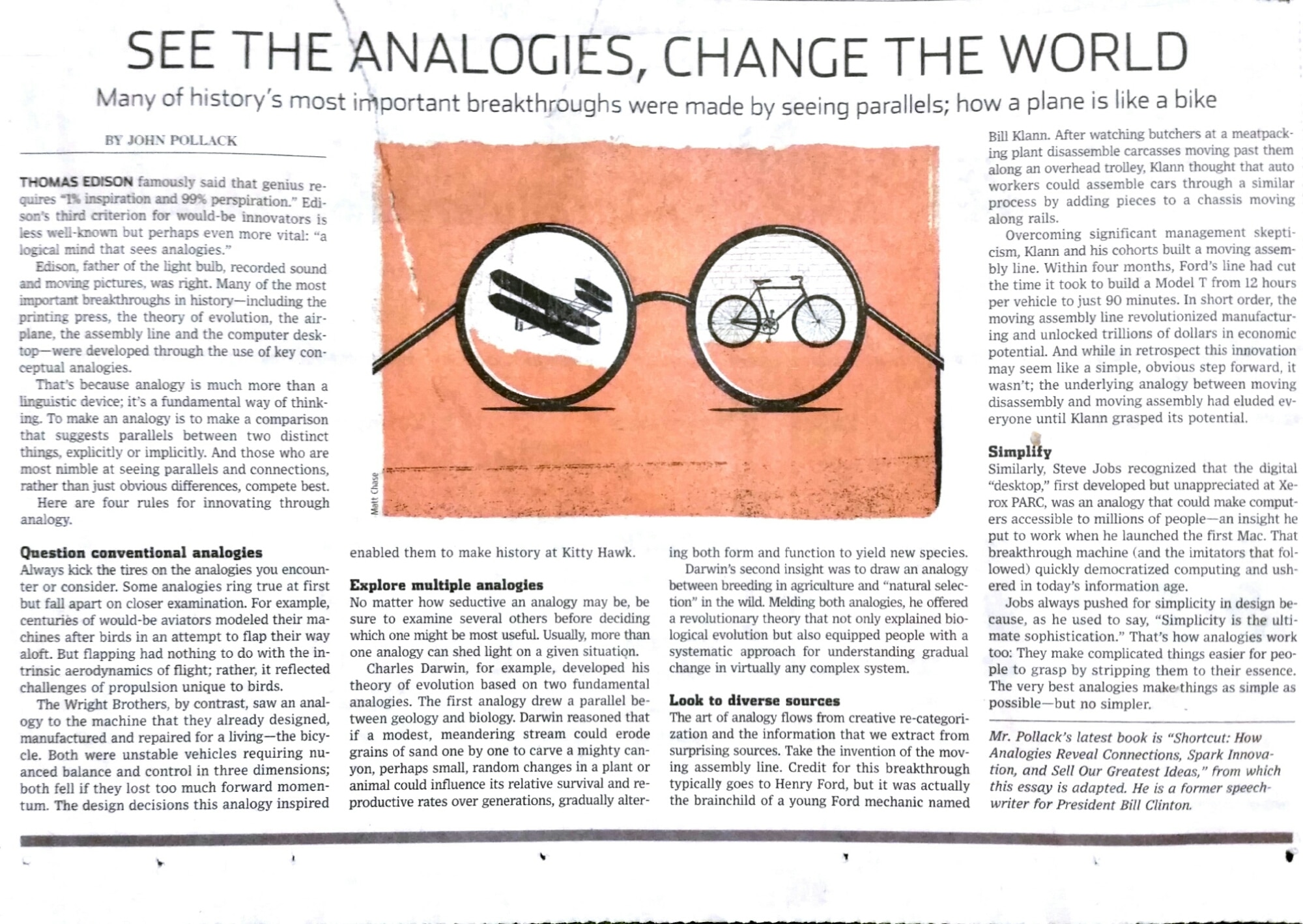 *Please note all text in the article is copyright WSJ and it is only posted here as a fair use example of OCR capabilites of CamScanner.

SEE THE ANALOGIES, CHANGE THE WORLD
Many of history’s most irnportant breakthroughs were made by seeing parallels ; how a plane is like
a bike
Bill Klann_After watcMng butchers at a
meatpackBY JOliX POLL\CK
ing plant disassemble carcasses moving past them
along an overhead trolley, Mann thought that auto
THOMAS EDISON famously said that genius
reworkers could assemble cars through a similar
qmres m inspiration and 99% perspiration_°
Ediprocess by adding pieces to a chassis moving
son’s tMM cxiierion for would-be innovators is
along rails.
less well-mown but perhaps even more vital :”a
Overcoming significant management
skepti
lqgical mind thart sees anaiogies.-

Ediso father of the light bulb, recorded sound
ar d blowing pictures. was right. Many of the most
important breakthroughs in Mstory-including the
minting press, the theory of evolution, the
airplane, the assembly line and the computer
deskroywere developed through the use of key
conceptual analogies.

tinat’s because analogy is much more than a
liwistic device : it’s a fundamental way of
thinking-To aiake an analogy is to make a comparison
that suggests parallels between two distinct
things, eJCplicitly or implicitly. And those who are
most nimble at seeing parallels and connections,
rather than just obvious difierences, compete best.

Here are four rules for innovating through
a
nalogy
*ii}:i

cism, Kiann and Ms cohorts built a moving
assembly line. Within four months, Ford’s line had cut
the time it took to build a Mode1T from 12 hours
per vehicle to just 90 minutes. In short order, the
moving assembly line revolutionized
manufacturing and unlocked trillions of dollars in economic
potentiaJ. And while in retrospect this innovation
may seem likeasimple, obvious step forward, it
wasn’t ; the underlying analogy between moving
disassembly and moving assembly had eluded
everyone until Klann grasped its potential.

Always kick the tires on the analogies you
encounter or consider. Some analogies ring true at first
but fall apart on closer examination. For example,
cennuies of would-be aviators modeled their
machines after birds in an attempt to flap their way
aloft. But flapping had nothing to do with the
intrinsie aerodynamics of flight ; rather, it reflected
challenges of propulsion unique to birds.

The Wright Brothers, by contrast, saw an
analogy to the machine that they already designed,
manufactured and repaired for a living-the
bicycle. Both were unstable vehicles requiring
nuanced balance and control in three dimensions ;
both 811 if they lost too much forward
momentum. The design decisions this analogy inspired

enabled them to make history at Kitty Hawk.

ing both form and function to yield new species.

Darwin’s second insight was to dlzw an analogy
between breeding in agricultl. ire and”natural
selection”in the wild. Melding both analogies, he offered
a revolutionary theory that not only explained
biological evolution but also equipped people with a
systematic approach for under standing gradual
change in virtually any complex system.

No matter how seductive an analogy may be, be
sure to examine several others before deciding
which one might be most useful. Usually, more than
one analogy can shed light on a given situation.

Charles Darwin, for example, developed his
theory of evolution based on two fundamental
analogies. The first analogy drew a parallel
between geology and biology. Darwin reasoned that
if a modest, meandering stream could erode
grains of sand one by one to carve a mighty
canyon, perhaps small, random changes in a plant or
animal could influence its relative survival and
reproductive rates over generations, gradually
alter
Look to dlver*e sources

The art of analogy flows from creative re-
categorization and the information that we extract from
surprising sources. Take the invention of the
moving assembly line. Credit for this breakthrough
typically goes to Henry Ford, but it was actually
the brainchild of a young Ford mechanic named

Similai-ly. Steve Jobs recognized that the digital
“clesktop.”First developed but unappreciated ilt
Xerox PARC, was an analogy that could make
computers accessible to millions of people-an insight he
put to work when he launched the first Mac. That
breakthrough machine (and the innitators that
foltowed) quickly democratized computing and
ushered in today’s information age.

Jobs always pushed for simplicity in design
because, as he used to say, “Simplicity is the
ultimate sophistication.”Thavs how analogies work
too : They make complicated things easier for
people to grasp by stripping them to their essence.
The very best analogies makepthings as simple as
possible-but no simpler.

Mr. Pollack’s latest book ix”Shortcut : How
Analogies Reveal Connections, Spark
Innovation, and Sell Our Greatest Ideas,”frurn which
this essay is adapted. He is a former
speechwriter for President Bi Clin ton.