I have greatly enjoyed Isaac Asimov’s foundation series. They are well written and are fairly quick reads. I am also astounded how much his work seems to have influenced Star Wars etc., Asimov’s “Galactic Empire” was truly a precursor to many of the more recent writings/movies and some lines seem to be lifted almost verbatim from Foundation… Foundation links / Audio version by BBC: Foundation series – Wikipedia, the free encyclopediahttp://en.wikipedia.org/wiki/Foundation_seriesThe Foundation Series is a science fiction series by Isaac 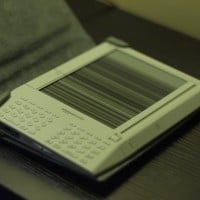 Alternative title: What to do if your Kindle breaks after warranty coverage has expired. What happened: last night we found out our Amazon Kindle was dead. It had been killed by American Airlines. What we’re doing: We are getting a replacement Kindle from Amazon (see below). What we will do differently: We will be even more careful with carry-on items that may get “valet checked” when we’re boarding the plane. We will try to check all of our valuables before leaving