Today I received my two LG HS102 projectors. These are DLP based projectors that use LEDs for their light source. This will be an ongoing review of the projectors. 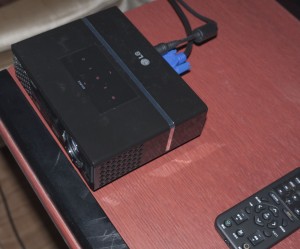 I couldn’t find any of these projectors for sale in the USA so my units were shipped directly from Korea. This meant that the units came with Korean instructions, a power supply that didn’t have a cable for USA electrical outlets, and a remote control with Korean characters.  To get it working here in the USA I did the following:

The projectors were very nicely packaged and even included a carrying case.

So far I am impressed with the projected image quality. Brightness is good, colors are saturated and the image is sharp. The one drawback so far is that the large screen size (80+ inches) could really use more resolution than 800×600. Pixels begin to become evident when they are shown on such a large scale.

However, my eventual strategy will be to use TWO of these projectors to create a 1600×600 display.

Noise: fairly quiet, it does have a fan (as do virtually all projectors if this ilk) but it doesn’t impede movie watching

Image size: the projector is rated at 80 inches but tonight Samantha and I used it at 82 inches with no ill effects

Screen used: we’ve simply been projecting directly onto our wall, with color adjusted to “cool” in order to compensate for our non-white wall. Eventually I may get out my dedicated projector screen, but so far the wall is working very well.

So far we’ve watched an episode of Seinfeld and an episode of Police Squad (the TV precursor to the Naked Gun movies). Seinfeld looked good but the low-res nature of the source file was evident when viewed at 82 inches. The 4×3 aspect ratio of older TV shows really works well with this projector.

The projector can play Divx movies via a USB storage device. However, the USB device needs to be formatted as FAT32 (NTFS is not supported).

Not ready for a final conclusion, but I am impressed so far.

More to come, this is just from the first night :-).